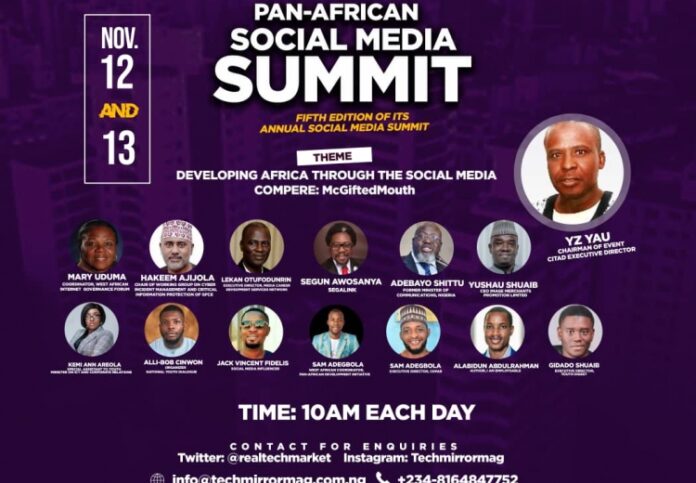 TECH DIGEST – Experts have spoken on how Africa can leverage the social media for development while tackling issues such as Fake News, propaganda among others.

According to the Chairman of the event who is also the Executive Director of Centre for Information Technology and Development (CITAD), YZ Yau, the event came at a critical time in the continent especially taking a look at recent events in Nigeria.

He advocated that there should be a more robust discussion around leveraging the social media for Africa’s development other than gagging the platform.

Speaking at the summit, the Image Merchant Promotions Limited Chief Executive Officer, Yushau Shuaib, emphasized the need for regulations to ensure that the social media is properly managed. While acknowledging the power of the social media, he noted that there is a need to fight fake news and propaganda which has become fast spread through the social media.

Yushau noted that the Social media has become manipulative giving an instance of the EndSARS protest which he said became violent due to poor management of information on the social media.

The African Union CyberSecurity Committee Experts Chairman, Abdul-hakeem Ajijola, while commenting on the theme noted that there is a need to create a workable framework for management of the social media on the continent.

He however said regulating the platform will lead to many Africans going under-ground which can be dangerous.

The Executive Director of Media Career Development Services Network, Lekan Otufodunrin, stressed the need for journalists to have a voice towards reporting the truth. He also frowned against fake news and propaganda which he noted is bring spread even by state actors.

Lekan condemned the clampdown on EndSARS promoters which according to him is ill-informed.

The Special Assistant to the Honorable Minister of Youth and Sports Development on ICT and Corporate Relations, Kemi Areola, while commenting on the theme acknowledged the growing roles of the social media in today’s society called for self-awareness and self-regulation on how to verify information before sharing.

She also noted that the social media is an opportunity for job creation which the Nigerian Ministry of Youth and Sports Development has been leveraging on.

While advocating for a whistle blowers policy to tackle fake news on social media, she noted that if actualized this will go a long way.

Other speakers like Gidado Shuaib (Executive Director YouthsDigest); Vincent Adeoba (Author I am Employeable); Alabidun Abdulrahman shuaib(Executive Director, Centre for Hunger and Poverty Alleviation and Research); Sam Adegbola (West African Coordinator, Pan-African Development Initiative), noted that it has become important for the social media to be seen as a platform for youth engagement and participatory governance.  Gidado while commenting noted that Youths need to rise up to the occasion of fighting fake news which has become rampant on the social media.

Adeoba condemned the plan to regulate the social media, noting that that voice of the people cannot be regulated.

Alabidun stressed the need to use the Social media to fight hunger and poverty.

Sam Adegbola who is an International Relations expert and represented by Olowniwa Temitope who is equally an international relations expert said Africa must begin to build relationships through the social media, advocating the platform as a force of change.

While delivering a Closing remark, Ali Sabo of CITAD noted that the event has come at a timely period and the discussions have become pivotal for governance promotion. He reteirated CITAD’s commitment to development and Information Technology development.

The Pan-African Social Media Summit is organized by TechMirror Magazine.

Techdigest - June 8, 2021 0
One-Sided Report on Igbos: A Fulani Woman's  Dilemma By Zubaida Baba Ibrahim TECH DIGEST - There is a school of thought that writer’s block comes from...

Digital Economy To Contribute 45% To Nigeria’s GDP By End Of...

Electronic Transmission Of Results: We Can’t Guarantee 100% Safety, NCC To...