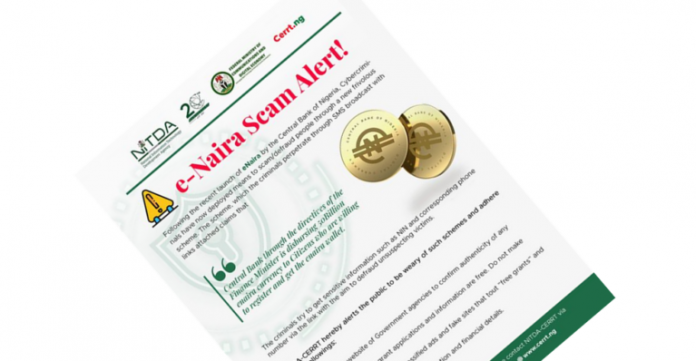 TECHDIGEST – Following the recent launch of eNaira by the Central Bank of Nigeria, Cybercriminals have now deployed means to scam/defraud people through a new frivolous scheme, the National Information Technology Agency (NITDA), has alerted Nigerians.

The scheme, which the criminals perpetrate through SMS broadcast with links reads;

“Central Bank through the directives of the Finance Minister is disbursing 50Billion enaira currency to Citizens who are willing to register and get the enaira wallet”.

Similarly, the Central Bank of Nigeria (CBN) said it has noted the criminal and illegal activities of some individuals and a fraudulent twitter handle, @enaira_cbdc purported to belong to the Bank.

The impostor handle and fraudulent persons, according to the apex bank, have been posting messages related to the digitized currency with the intent of wooing unsuspecting Nigerians with claims that the Central Bank of Nigeria (CBN), among other falsities, is disbursing the sum of 50 Billion of the currency.

“These impostors are bent on defrauding innocent and unsuspecting members of the public through the links attached to their messages for application to obtain eNaira wallets and become beneficiaries of the said 50 billion eNaira currency”, the CBN said.

ATCON’s President Condoles With Pantami Over Death Of His Daughter

NITDA unveils top 30 Startups of the Bridge to MassChallenge Nigeria...