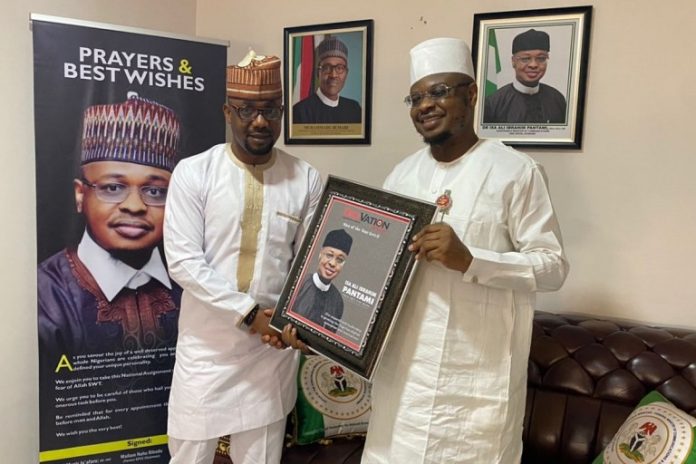 TECHDIGEST – The editorial team of DigiVation Global Network, Africa’s pioneer specialised IT Media, has presented its esteem DigiVation Man of the Year Award to Prof. Isa Ali Pantami, the minister of Communications and Digital Economy, at his office in Abuja.

Intimating the Minister of his emergence, the Editor in-Chief, Hilary Damissah, praised the efforts and initiatives of the Minister and the gains recorded which according to him have given Nigeria some competitive bargain in the innovation and Information Communications industry.

He added that “Pantami choice was based on his unparalleled leadership in growing the Nigerian digital enterprise and innovation”.

Dr Bayero Agabi, the president and chairman of DigiVation Editorial Board, highlighted that the Minister has demonstrated leadership and commitment to repositioning the Nigeria digital economy sector to now become the poster boy of the economy.

In his response, Prof. Pantami, the Minister, expressed his gratitude to the Management of DigiVation Global Network and the organisation’s contributions to nation building.

He assured that the recognition will further spur him and his team to continue to do better. The award instituted four years ago has had four previous winners with the first being Austin Okere founder Computer Warehouse Group, followed by Dr Akwasi Agyeman Executive Director/CEO, Ghana Tourism Authority, while from East Africa the only woman to have won it was Rwanda’s Minister of ICT and Innovation Paula Ingabire and for 2021, DigiVation Global Network announced the award winner as Nigeria’s Minister of Communications and Digital Economy Isa Ali Patami as the DigiVation Man of the Year.

Accordingly to the foremost IT media organisation, the emergence of the relentless Pantami was arrived at through a rigorous research process carried out by our team of reporters and industry stakeholders to name him as the eventual winner.

Digivation Global Network is a multimedia organization with interest in content production, events across Africa, Europe and America.

It’s the only media and tech outfit to have won the prestigious United Nations Economic Commission for Africa/Africa Information Society Merit Award twice for balance report and research.

WhatsApp Will Not Run on Millions of Older Phones from January...