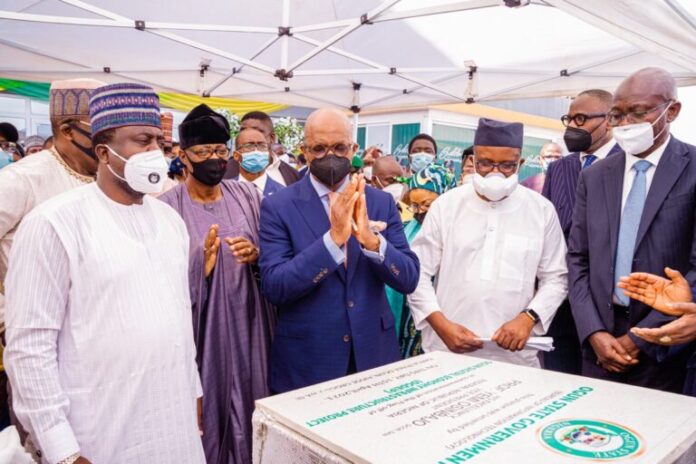 The Company is partnering with Ogun state government to execute the all-important project hence the commitment of close to $75 Million to the project in expectation that the initiative would see the economy of Ogun state grow by additional $100 billion.

Speaking at the flag-off ceremony, Osinbajo commended Ogun state for taking a bold step in spearheading the move for an overall digital economy in the country.

The Vice President who launched the project virtually, acknowledged a urgent need to democratise access to internet in the country, adding that digital technology is the future of all aspects of human existence.

He said, “This project is a critical component of Mr. President’s objective of broadband connectivity for all by 2023. This ambition is now enshrined in our Economic Sustainability Plan. As part of the national commitment to make broadband connectivity available to all, you would recall that in 2017, the State Governors under the auspices of the National Economic Council (NEC) in 2017 agreed to harmonize right of way charges which is presently being worked on.

“In another demonstration of government’s commitment , the Federal Ministry of Communications and Digital Economy launched the National Broadband Plan which is designed to deliver data download speeds across Nigeria of a minimum 25Mbps in urban areas and 10Mbps in rural areas, with effective coverage available to at least 90% of the population by 2025 at affordable prices”.

Osinbajo also commended 21st Century Technologies for its huge commitments to the project , adding that this would revolutionize every aspect of the socio-economic life of Ogun state.

Earlier, Governor of Ogun State, Dapo Abiodun, stated that the strategy of OGDEP was to provide broadband connectivity to every corner of Ogun State.

“This is a joint project between our administration and our partner, 21st Century Technologies Limited , to deliver fibre-optic cables and mechanics across all our 20 Local Government Areas within the next two years.

“The first phase of OGDEP will establish a fibre optic network ring around the entire State that will ensure connectivity particularly for key educational institutions, government agencies and residents in unconnected and under-connected areas”.

Speaking at the ceremony, the Vice Chairman/CEO of 21st Century Technologies limited, Wale Ajisebutu affirmed that the initiative would see all business sectors and citizens of Ogun state operate digitally, using fibre networks infrastructure, knowledge infrastructure and marketing and network.

“This would also enable industries while placing Ogun state in the heart of the 4th industrial revolution where science, technology and social media are rapidly transforming the world “

He urged all hands to be on deck to ensure the project achieve enviable success.

National Identification and the Fight Against Insecurity In Nigeria

Is Cryptocurrency a Worthy Investment?