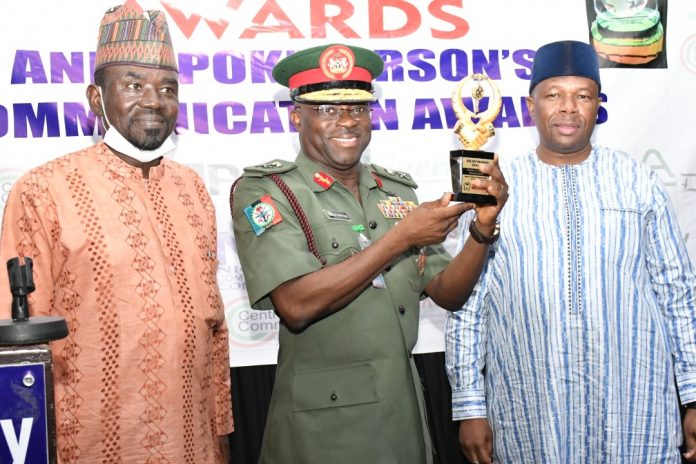 The Award Ceremony which took place Saturday at NICON Luxury Hotel Abuja, conferred the honors on General Sawyer for demonstrating exceptional leadership qualities, amiability and high sense of responsibility in discharging his duty.

“Within the short period of his tenure, he enhanced media relations activities by attending to press inquiries most times even in the face of occasional provocations. He also organized media workshops and retreats to further enhance mutual and beneficial relationships,” the citation for his award said.

Upon assuming duty in July, Sawyer promised to run an open door policy to fast track information needed by journalists to carry out their reportage.

Now in its third year, the SAEMA Award was organized by the Emergency Digest, a publication of the award-winning Image Merchants Promotion Limited in conjunction with the Centre for Crisis Communication (CCC) and the Civil Society Legislative Advocacy Centre (CISLAC) to publicly acknowledge and celebrate outstanding contributions in security and emergency management with a view to creating a resilient and professional approach in tackling national challenges.

It also featured the SABRE Awards and the Inaugural Spokesperson’s Communication Awards (SCA).

Also honoured at the event was Lt. Col. Ponfa Andrew Wuyep of the Nigerian Army, Flt. Lt. Abayomi A. Dairo of the Nigerian Airforce, and Inspector Abimaje Isaiah of the NSCDC and ASP Mariam Yusuf of the police.

Others winners of individual categories of the SAEMA award included , Mrs Abimbola Animashawun of the Nigeria Customs Service, Saminu Audu of the Civilian JTF and Sifon Essien of the TVC.

5 ways To Attract Right Customers For Your Online Business