TECH DIGEST – A resident of Ningi in Bauchi State has commended the Nigerian Communications Commission (NCC) for the responsiveness of its National Emergency Number 112 in tackling fire incident from ravaging a pharmaceutical shop.

TechEconomy.ng sighted Citizen Adogu Ibrahim’s post on social media where he narrated how the emergency number became instrumental to prevent the pharmaceutical shop from what could have been a major fire disaster.

Ibrahim narrating the story, wrote: “​Today, I really feel proud of my country. A neighbor of mine pharmacy shop was up in flame. I made a call through 112 to the emergency fire service and got immediate response. They called back immediately that they were already on ground and the fire put out with little or no damage even before I got to the premise. 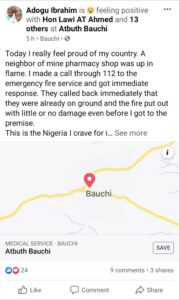 “This is the Nigeria I crave for in all sectors where efficiency defines our approach to public services.

In a swift comment on this, Yakubu Musa, special Adviser (Media) to the Executive Vice Chairman of NCC, Professor Umar Danbatta, reiterated that the 112 emergency number has been playing role in the nation’s emergency response across  the country. 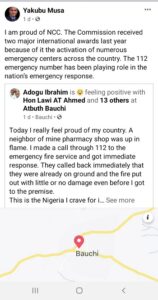 “I am proud of NCC. The Commission received two major international awards last year because of it the activation of numerous emergency centers across the country. The 112-emergency-number has been playing role in the nation’s emergency response”, he wrote.

TechEconomy.ng had reported how the National Emergency Number 112 established by the Nigerian Communications Commission (NCC) provided succour to Nigerians in the nation’s collective efforts to fight the spread of Coronavirus pandemic (COVID-19).

Nigerians are able to call emergency response agencies/or first responders with respect to any issue they may want to report on the Coronavirus or other health-related issues and emergencies.

Already, states and federal government agencies are leveraging the 112 National Emergency Number, whose calls are handled through the Emergency Communication Centre (ECC) established by the Commission across the country.

The ECC project is the brainchild of NCC to enable easy communication by Nigerians with emergency first responders such as Police, Fire Service, Federal Road Safety Corps, National Orientation Agency (NOA) among others, by dialing the three-digit toll-free Number 112.

On assuming office as the Executive Vice Chairman of NCC in 2015, Prof. Umar Danbatta, quickly put machinery in place to accelerate the implementation of ECC across the country in line with the decision of the Nigerian government to enhance security of lives and property and as mandated by the Nigerian Communications Act (NCA) 2003.

Skills Rather Than Just Degrees: A Timely Professional Advocacy

How NITDA Saved Billions Of Naira For FG Via IT Projects...

Techdigest - March 10, 2022 0
How NITDA Saved Billions Of Naira For FG Via IT Projects Clearance TECHDIGEST - In addition to its primary function, which is to develop and...

Skills Rather Than Just Degrees: A Timely Professional Advocacy